Living in the Willamette Valley of Oregon means living in a very moderate climate. While we have four seasons, they are not as harshly distinct as in other parts of America. Each winter we usually see some snow (at least one dusting) and about every 6 years we get a mess of 6+ inches.

This winter has been a mess year. Between December and January we have had four separate and distinct snows. It has snowed, melted, and a few days later, snowed again. The last episode of snow was an unusually nice load of it too. The weather was dry for days after keeping the deep powder soft and fluffy for a full week. It was great! Sure, there were icy places in the road where cars had melted the snow, and it had frozen, but when you’re jobless (as I currently am), that doesn’t matter. I completely enjoyed the obligated chill time.

I’ve wanted to get up to Mount Hood or travel to Bend or another snow destination this winter, but I lucked out and the snow came to me. Snow changes absolutely everything -in the best ways possible. An area you once knew becomes suddenly new covered in snow. So I explored my own backyard in all its newness. With the powdery snow, I had no problems keeping traction as I adventured to the local park and around the neighborhood.

Walking in a winter land… 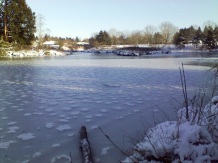 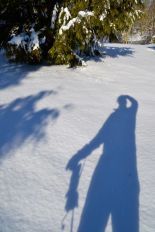 Toward the end of the week, when I heard we were about to get some freezing rain, I scrambled and found a few enthusiastic assistants. I had seen on Pinterest.com some fun photos created with unique light, and I didn’t want to miss this unique opportunity with all the glorious snow. So after dark I took them out to a snowy open space, along with a handful of 4th of July leftover sparklers. Boy I wish I had had more! More sparklers and more time to experiment… 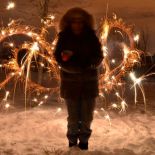 On a side note, with the reflection off the bright white snow, even after dark, I learned that my camera’s aperture did not need to be wide open and the shutter speed did not have to be too long to get a decent shot. I set the aperture about halfway open and the shutter speed to 10 seconds to get these shots. Oh and I learned that the person running around with the sparkler needs to move fast and keep the light away from her face! (The ghost you might make out is me…)